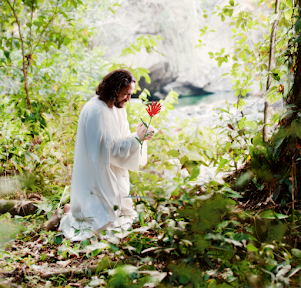 I would like to share an experience I had with the Lord and the warning that came with it...
I saw Jesus in a garden. It was His garden. He was bent over in the right corner of the garden, and He was working intensely; pulling up plants and placing them into a pile to His left. I was observing all of this from a distance.
He continued for awhile before acknowledging that I was watching from behind. He straighten up and turned His face towards me and asked, "What color are the roots on those plants?"
He was referring to the uprooted pile on His left.
I gazed over at the pile and noticed that the plants were all dried up and dead. I studied the roots of each plant in the pile.
"They're white, Lord" I responded.
As I said this a wind began to blow. The pile of dead shrubs began to roll and were tossed away with the wind.
The Lord said, "The winds of change are here. That which is dead will be uprooted and carried away like tumbleweed."
My vision then ended.
Several days later, the Lord starting speaking to me about the vision.
"Do you remember the dried plants that you witnessed Me pulling up?"
"Yes, Lord. I remember."
"Noticed they all had roots."
"Yes, Lord. They all had roots, but they were dry."
The Lord then took me back a few years ago when I went away to fast and pray. I stayed at a beach in Florida. The Lord summoned me one morning, at dawn to come walk with Him on the beach. There, He spoke to me about the importance of flowing water. He taught me that only flowing water can contain life; stagnant water could not.
I was pondering how the Lord was relating the current vision to the time at the beach.
"You love plants Mena..." He continued.
"I do Lord!"
"So tell Me, if you have an established plant, and you don't water it for a day, will it die?"
"No Lord" I responded.
"If you wait a week, will it die?"
"Not usually, but it may begin to wither" I said.
I thought about an Himalayan vine I had for several years. Whenever I left the country to go minister, my kids, who were still at home at the time, would forget to water it. By the time I would return, the vine would always be withered and on the brink of death. Yet somehow, when I'd water it again, it always bounced back the next day. I named the plant Lazarus because of this.
Jesus continued, "In order for roots to become completely dry, to the point of death, one must have gone without watering for an extended amount of time."
I agreed with what He was saying.
"Warn my children! This is a season of sifting, shifting, and separation. There are those who were once rooted in Me, but now they have allowed iniquity (hidden sins; i.e. sins of the heart/emotions, wickedness) and the treasures of the world to stop the flow of Living Waters. They must REPENT and turn their face towards me once more. For that which no longer contains Life will be plucked up and in the end, cast into the fire. I AM the Living Water."
I want to add that a garden is a place of decision. It symbolizes a crossroad of life or death. Mankind began in a garden, but they chose to satisfy the flesh instead of the spirit, which produced death. Four thousand years later, Jesus came to the same crossroad in the garden of Gethsemane, but He chose to face death so that we can obtain life.
What will you choose in the garden?
Shalom
Mena Lee Jones
Faithful Walk Healing Ministries
Posted by Mena Lee Jones at 10:28 AM 2 comments: