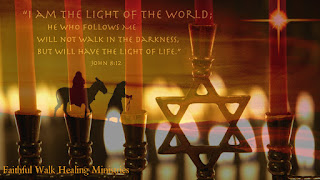 It's interesting that at the same time, every year, the same people come out of their caves and from underneath their rocks, stretching their wings; the Sadducees, the Pharisees and the Atheists.

If the "Holiday Season" was so evil, then why has Satan worked so hard to have it removed, discredited, abolished or persecuted? Last time I checked, the scriptures stated that Satan will not come against Satan.

Personally, this is my favorite time of the year. For me, it is another opportunity to give thanks for all that the Father has given, and to share with the lost the reason why Christ came into the world. I have found that more souls have come to Christ in sharing the story of His reason, then condemning those for celebrating it for mere argument of it's inaccuracy in date. I've always stood on "to each, it's own" and as individuals filled with the Holy Spirit, we must obey our convictions. I, for instance, have never had a Christmas tree in my home. My children don't even know what that's like. But I grew up with them in my parent's house, and it didn't make my mother any less of a powerful woman of God, than she is today. So dare I walk into a home of another believer, or unbeliever and condemn them for such? Who am I? Perhaps the most important question is; does it determine one's salvation? The answer is no.

Last night, I asked my kids what did they want to do, or where did they want to go for the Holiday Season. Their response was that they wanted to find families who couldn't afford a Christmas for their children, and bless them. So we agreed to find families this year, preferably unbelievers, so that we can share the love of Christ and minister His word while physically filling a void.

Remember; Christ condemns no one. Always obey the voice of the Lord for yourself, because only you will stand before Him. Educate those who lack knowledge; don't ridicule, slander, reject or condemn; this is not love. More importantly, remember that you were not called out of darkness into the light to only hang out in the light. You were brought into to light so that His light in you will be taken back into the darkness to shine. What value does light have with light? None. It is the light that shines in the darkness that brings forth life. So take every opportunity to make a difference. Time is short; the harvest is plentiful, but the workers are few.

Romans 5:19-21 Because one person disobeyed God, many became sinners. But because one other person obeyed God, many will be made righteous. God’s law was given so that all people could see how sinful they were. But as people sinned more and more, God’s wonderful grace became more abundant. So just as sin ruled over all people and brought them to death, now God’s wonderful grace rules instead, giving us right standing with God and resulting in eternal life through Jesus Christ our Lord.