The Cost of Discipleship... 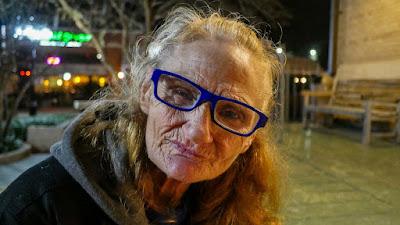 A certain scribe came and said to Him, "Teacher, I will follow You wherever You go." And Jesus said to him, "Foxes have dens and birds of air have nests, but the Son of Man has no where to lay His head." - Matthew 8:19-20
I just watched a four-minute video about a 73 year old homeless woman who had been on the streets since she was 13. She had lived a hard life; orphanages, drugs, violence, and various shelters. But then she met Jesus, and He changed her entire perspective of living on the streets. She was now content; not a single complaint, and she helped many. When the woman was asked what was her wish, she ended with that everyone would know Jesus like she did.
I've often said that most American Christians do not truly know suffering and persecution. Most have a roof over their head (even if temporary), electricity, a cell phone, running water to bathe, and some form of food. Yet we complain. We complain about not having more. We want bigger and better, and we are not content with what has been provided to us.
In the recent years, there's been a movement of Christians wanting God to "Bless this nation" simply so that they could hold on and add to their stuff. But there is a time coming, and that is now upon us, when "our stuff" will be stripped away. Then what will you have? For most, the answer is nothing. But for the old lady in that video, she already had everything, because she had Jesus.
When the Lord called me into ministry in 2007, He had me to sell everything, pack my car with three small children and drive across seven states to North Carolina. There, we lived in an apartment, in a not-so-great neighborhood, and ate and slept on the floor for at least six months. The Lord said, "I'm going to teach you to Bless My name for everything you receive." When I finally purchased a sofa set, the Lord then had me to open my home for bible study.
Eight years later, He stripped me again; this time of my career in the medical field. He said I was going to "work for Him" now, and when I asked about the bills, His response was, "Do you trust Me?"
Five years after that, I was stripped again; this time of my family, friends, and everything familiar to me. He said, "Set your face to the Son of Righteousness and do not look back."
I said, "Lord, I will follow You into the wilderness, even if that means alone, and I will preach to the serpent and the scorpion if that's what pleases you."
I'm sharing all of this with you because as Christ-followers, we need to understand the true cost of discipleship. We've been taught for years that following Christ means that He wants you to be happy: that financial increase, good health, big buildings, and private jets is a sign that you're in God's will and favor.
But this is all a lie.
We have to remember that the King of Kings was born in a barn, wrapped in rags, and laid in a feeding box. His first worshippers were poor shepherds tending to their flock at night.
This King later grew up to live and sit among the rejected, the despised, dirty, and untouchable, the drunkards, and whores, tax collectors, pagans, and the forgotten. Yet His arm was never too short, compassion filled His heart, and He taught, forgave, and healed them all.
But when the day was over and the sun had set, the Son of Man had no place to lay His head.
Later, the Apostle Paul wrote, "Not that I speak in regard of need, for I have learned in whatever state I am, to be content.  I know how to be abased and I know how to abound. Everywhere and in all things I have learned both to be full and to be hungry, both to abound and to suffer need. I can do all things through Christ who strengthens me." - Philippians 4:11-13
There is a season of testing coming (and it has begun); a season of hardship. Will you be able to pass the test? Will you love not your life, even unto death?
For those who are rooted in Christ, the wilderness will be a place of opportunity and refinement; a place to come up higher. But for those who still have Egypt in their heart, it will be a place of death.
Spiritual Food For Thought
Shalom
Mena Lee Grebin
Faithful Walk Healing Ministries
Posted by Mena Lee Grebin at 7:16 AM 3 comments:

Walk in His Spirit... 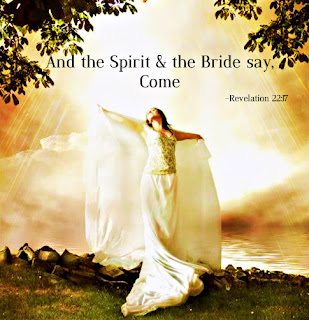 In the dawning of the morning, the Lord spoke to me and said,

"I AM not looking for those who know my power, but for the ones who walk in My Spirit."

He then quoted Zechariah 4:6;

So he answered and said unto me, "This is the word of the Lord to Zerubbabel: 'Not by might, nor by power, but by My Spirit,' says the Lord of Hosts.

Throughout the Old Testament, we see countless examples of YHVH-God's power. Through these manifestations, kings bowed, enemies retreated, walls crumbled, skies were darkened, the earth shook, and even the sun stood still. Because of this, many feared the God of the Israelites, and some even worshiped Him in hopes that this would bring blessings and peace upon them.

But by the time we get to the New Testament, we find a man by the name of Nicodemus who came to Christ at night, searching for the keys to heaven; and there, he was told that in spite of all the doctrines taught, the law-keeping, and demonstrations of God's power, unless one was born of 'water and Spirit' they could not enter the Kingdom of God (John 3:5).

Once we become born-again, we are now body, soul, and Spirit. That 'Spirit' which you were not born with the first time (because of the sin of Adam and Eve), is the breath (Hebrew: ruach) of the Living God that now dwells in you.

And when He [Yeshua] said this, He breathed on them and said unto them, "Receive ye the Holy Spirit."

Note: This was the disciples "born-again" experience once Christ had died and resurrected, which is separate from the fire-baptism experience of Acts 2.

Now that we are body, soul, and Spirit, it is our duty to make sure that we are not lead by the flesh [body], but that we are lead by [His] the Spirit - which takes discipline. This is where the daily process of 'killing the flesh', and submitting to the will of Christ comes in. Our soul is the middle-man; meaning it will go wherever it is lead. So if we allow our flesh to lead, then sin will enter in and darken our souls. But if we allow the Spirit to lead, then our souls will be purified and we will walk in the light of Christ.


As we accomplish total surrender to the Spirit of the Lord, we will draw closer unto Him. As we draw closer to Him, the less we will fall into sin. And the lesser we sin, the more we will walk in righteousness and holiness.

In Romans 8:14, the Apostle Paul wrote; "For as many as are led by the Spirit of God, these are the Sons of God."

In this season, the Spirit of the Lord is searching for those who are willing to walk in His Spirit. It is only through this that we will be able to survive and even escape the darkness and judgments that is upon the earth. By walking in Christ, we will not fall into temptation, we will not walk in fear, and we will not be overcomed by the evil one. In the end, we will be victorious!

In closing, I will leave you with this scripture;