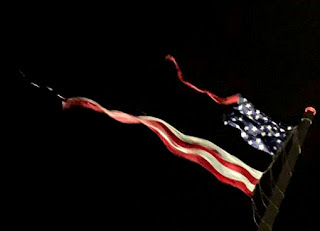 As we roll into another presidency and unprecedented (blue) government, I want to address what I know is plaguing many of the Christians’ minds: “What happened with all the prophecies that Trump would win two terms?”

Before you start uploading a million and one videos on who’s a false prophet, I want to educate you on prophecy itself and how it works.

Most modern Christians base whether or not a person is a true prophet on the scripture in Deuteronomy 18:22, which states;

“When a prophet speaks in the name of the Lord, if the thing does not happen or come to pass, that is the thing which the Lord has not spoken; the prophet has spoken it presumptuously; you shall not be afraid of him.”

So, in the twenty-first century church, the basis of this is, if someone speaks something and it comes to pass, then they must be from God, and if it doesn’t come to pass, then one is deemed a false prophet.

Let me tell you why in this season, that is a dangerous conclusion...

We are forgetting that Jesus, Himself, stated in Matthew 24:24-25, “For false christs and false prophets will rise and show great signs and wonders to deceive, if possible, even the elect. See, I have told you beforehand.”

In other words, Jesus warned us that in the last days the false prophets/christs would be so accurate and the signs would be so significant, that if possible, even His chosen would be deceived. This is why in these days it is so important to test the spirit (of the person speaking) with the [Holy] Spirit (who is the bearer of truth).

True prophecy typically falls into one of two categories: conditional and governmental.

A conditional prophecy is one that is usually given to an individual, group, or territory, and is contingent upon one’s execution of obedience or disobedience to God. We find multiple examples of this throughout biblical history. However, I will name two just so you understand my direction.

Jonah’s prophecy of the destruction of Nineveh – Jonah 3

A governmental prophecy is one that is unconditional because it was written in place before the foundations of the world. These are God’s appointed times and seasons; which are set and cannot be changed. No manner of fasting, praying, marching, or hoping can change what the Lord of Hosts has set into play.

Again, they are many examples of these in the scriptures, which include, but are not limited to the birth, death, and resurrection of Christ, Israel being scattered and then restored, the resurrection of the dead, the rise of the eighth kingdom (the beast and the false prophet), and the second coming and millennial reign of Christ.

That being said, the prophecies regarding Donald Trump were not governmental; which means that they were contingent upon the actions or reactions of the president and the people.

When Trump got into office, many in the church claimed this was a “reprieve” given, and a time when the lost could be reached, the church could unite, and revivals could take place. Many prayed and fasted for this season. However, once Trump was in office, the results were quite the opposite. Instead of unity, evangelism, and revival, the American church became arrogant, boastful, and divided. We saw brother rise against brother, segregation, defiance, and racial tensions. Politics began being preached from pulpits while paralleled with the Gospel, and Trump became a golden calf for many (not all).

It reminded me of when God told Moses, “Go down from here, for the people who thou hast brought out of Egypt, have corrupted themselves.” – Exodus 32:7

Even when the Lord warned that idolatry had taken place in many hearts, the people snarled, scoffed, and even overtook the messengers by verballing beating them down. I personally had several people come to me, wounded from the vicious attacks made by those who were considered brethren.

In October, 2020, the Lord gave me a dream where I saw Trump writing on a piece of paper, that because of something that transpired with the ballots, he was “writing” to tell the people that he won the election and would be president for four more years. At that point, I heard an outbreak of chaos and violence from behind the scenes.

I took this dream to prayer and the Lord spoke “Ezekiel 14” to me. In this scripture, the Lord accused His people of “inquiring of the Lord” to His prophets, with idolatry in their hearts. And the Lord stated that because they would not repent of their idolatries, He would send them prophets that would tell them exactly what they wanted to hear, only in the end, to solidify their judgement.

Now, here we are. Trump has lost the election. And even though one can reasonably argue that it was stolen, you have to understand that not even Satan can execute without permission. So, in the end, the God who is in control of all things, allowed this to happen. And the truth is, He told me this would happen four years ago.

So, don’t pull out your false prophet list to add dozens of names to it, although, many of these people did help to invoke the judgement being passed upon the church. But simply put; God gave the church exactly what they begged and shouted for the first time. However, in the end, God will not be mocked; He will not allow His name to be trampled.

This is the judgement of the American Church. What was prayed away in 2016 (by not getting Hillary Clinton), has returned in 2021.

But as I see it; the greatest outpouring always happens during persecution and tribulation. I mean, just take a look at the first-century church and their accomplishments. Oil and wine cannot be produced unless there is a crushing.

The Lord is cleaning the threshing floor and purifying His Bride because the Day of the Lord is at hand, and He is coming only for a Bride that has made herself ready, and without spot or wrinkle.

Allow yourself to be purified in this final season. It will not be easy, and your faith will be greatly tested. But know that we are the generation that will see all these things spoken, come to pass. And the ones who endure to the end, shall be saved.