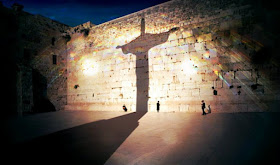 I found myself at the wailing wall in Jerusalem. It was a busy, bright day, and I noticed that I was on the side where the men prayed. Directly in front of me, about ten or eleven yards, stood Jesus. He was at the wall praying. His back was turned towards me, but I recognized Him immediately. He was dressed in a simple linen robe, and wore leather sandals on His feet. Across His shoulders and back, draped a huge tallit (prayer shawl). To His right and left stood Jewish men; some rabbis. They were all praying, some rocking while cupping little prayer books in their hands.

Full of excitement, I called out to the Lord and began walking towards Him. But I was quickly quieted at the thought that someone would notice a woman was on the wrong side of the wall. My walk turned into a light jog as I made my way through the crowd towards Jesus.

As I drew closer, I noticed that a rabbi began to shout to another rabbi about the fact the Jesus' head was not covered with a kippah. The rabbi seemed irritated, and looked around asking for someone to give him a spare kippah for Jesus' head. To the rabbi, Jesus was just a man who had was not properly dressed for prayer. I realized that no one recognized Him.

Finally, a man tossed the rabbi an overly large purple kippah, with a golden Star of David embroidered at the center. The rabbi walked over towards Jesus and slapped the kippah onto His head. Jesus never moved.

I made my way through to the Lord, and stood next to Him at the wall. I was still very excited to see Him. Jesus turned towards me, and I saw great despair on His face. He looked as if He had been crying. Instantly, I connected with His spirit, and I knew He was saddened because no one recognized Him, yet still, a great love radiated from His core. He had been praying for His people, Israel.

Jesus reached out His hand, and we both turned to walk away. As we walked through the crowd, people passed to our left and our right, but no one seem to pay us any mind. I looked at Jesus and asked, "Lord, why do you appear differently to people?"

Jesus took a few more steps, and then turned to me and said, "I reveal myself to people according to their hearts..."

Many times we can get so caught up in the religious routines of life, that we end up missing our core purpose. So many Christians have a preconceived notion of who God is and how He's suppose to manifest Himself in our lives. Some base this on how they grew up, or what their parents taught them, or even what they heard in church. But truly, what man can contain God? How can one mortal being know all the ways of Elohim?

The Pharisees thought they were prepared for the Messiah. They thought they knew what He was supposed to look and sound like. After all, they had studied all the writings of the prophets, and were awaiting the coming King. Yet when He came, they were blinded by their own religion and bias; therefore they missed Him.

The rabbi at the wailing wall did not recognize Jesus; all he saw was a man who did not have proper attire...

In the latter days, the Spirit of the Lord wants to visit us in ways we've never experienced. He wants to expand our walls and reveal the hidden mysteries of His existence. But we must be willing to die to our preconceived notion of who He is and how He's suppose to manifest. We must let Him be the I AM in our lives.

Think about that statement: YHVH said "I AM," not "I was," which means He no longer is; nor did He say "I will be," which means He has yet to come into existence. No, He is the I AM; the ever present God. He is everything, because He owns everything. Your life is already written out. It is already done. He's just asking that you walk with Him in the now, and let His will be done in your life. Now is the time to open your heart so that the Son of Righteousness can reveal Himself to you.